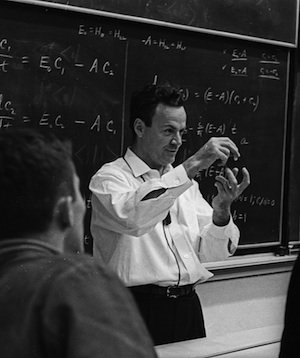 The Richard P. Feynman Prize for Excellence in Teaching was established in 1993 to honor annually a professor who demonstrates, in the broadest sense, unusual ability, creativity, and innovation in undergraduate and graduate classroom or laboratory teaching.

The late Richard Feynman, one of the most brilliant theoretical physicists and original thinkers of the 20th century, epitomizes Caltech for many. Although Feynman's Nobel-prize winning research (he won in 1965) was largely completed before he came to Caltech in 1949, he continued to make discoveries at Caltech that many felt should have won him a second Nobel Prize. Beloved by students as a friend and teacher, Feynman also found time to perform year after year in Caltech student dramatic productions. A drummer and artist as well as a physicist and actor, in 1985 he also turned popular author and published an irreverent memoir - Surely You're Joking, Mr. Feynman - that spent 14 weeks on the New York Times best-seller list. In 1986, he became known to an even larger audience through his participation - and his famous ice-water experiment - on the Presidential Commission investigating the explosion of the Space Shuttle Challenger. Commenting on Feymnan's appointment to the commission, one Caltech colleague came as close as any to summing up the essential quality of his genius: "Do they realize," he wondered, "that Feynman asks questions - and keeps asking them until he gets answers?"

Endowed through the generosity of Ione and Robert E. Paradise and an anonymous local couple, the prize consists of a cash award of $3,500, matched by an equivalent raise in the annual salary of the awardee.

All tenure-track and tenured professorial faculty of the Institute are eligible, and nominations for the Feynman Teaching Prize are welcome from faculty, students, postdoctoral scholars, staff, and alumni.